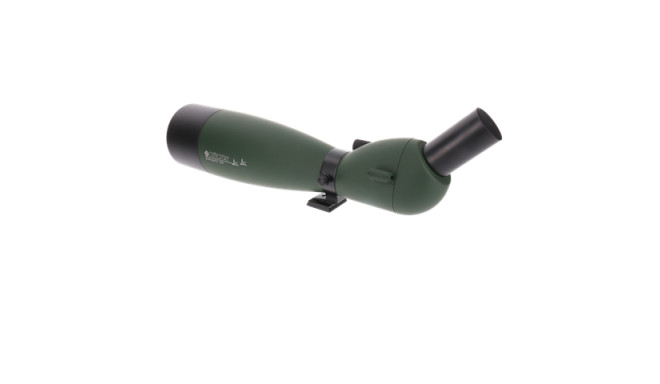 The Konus Spotting Scope Konuspot-100 20-60x100 is an attractive spotting scope for bird and airplane spotters. With a variable zoom of 20-60x and the BaK-4 glass with multicoatings, this spotting scope provides a clear and realistic image. The Konus

The Konus Spotting Scope Konuspot-100 20-60x100 is an attractive spotting scope for bird and airplane spotters. With a variable zoom of 20-60x and the BaK-4 glass with multicoatings, this spotting scope provides a clear and realistic image. The Konuspot-100 20-60x100 also provides a good image in less light conditions. With a viewing angle of 45 degrees, you can make observations in a very relaxed way.

The Konus Spotting Scope Konuspot-100 20-60x100 can be used immediately by removing the protective caps from the eyepiece and lens. When looking through the eyepiece, you can rotate the focus wheel on top of the spotting scope to focus the image. When you rotate the eyepiece to the left, you enlarge the subject and it will be necessary to focus again using the focus wheel. With these magnifications, it may be smart to use a tripod to observe the subject even better. Using the supplied tripod bracket, you can evenly distribute the weight of the spotting scope when using a tripod. This prevents the Konuspot-100 from hanging forward because most of the weight is on the front of the Konuspot-100.

The included carrying case is equipped with multiple zippers which makes it possible to use the Konus Konuspot-100 20-60x100 while it remains in the carrying case. This way, you can use it very quickly when you want to see something unexpectedly. Despite this case, it is smart to put the protective caps back on the spotting scope to prevent any damage.

Smartphone adapter for smartphones up to 86mm wide

With the Konus Spotting Scope Konuspot-100 20-60x100, you can easily take photos and videos of the subject you are observing using the included Smartphone adapter and your own smartphone. By using this adapter in combination with your smartphone, it is also possible to look at the subject with several people at the same time. This is possible because what you are observing is displayed on the screen of your smartphone. It is also still possible to take photos and videos at the same time.
You place your smartphone in the smartphone adapter and center the camera in the middle of the circle. Now you can remove the rubber from the eyepiece of the Konuspot-100 and twist the Smartphone adapter onto the thread. When you now open the camera application of your smartphone you can use the screen to observe and to take pictures and make videos. If the image is unclear, you can remedy this by zooming in on your phone, as you are normally used to, or by using the focus ring of the Konus Konuspot-100.

Using the DSLR adapter it is also possible to use your SLR camera to take pictures of the observations. In this case, you must have a T2 adapter (see optional accessories) which you mount on your SLR camera instead of the lens. Even now it is possible to look at the screen with several people at the same time to see the observations. Also, this way the possibility remains to take pictures with your camera.