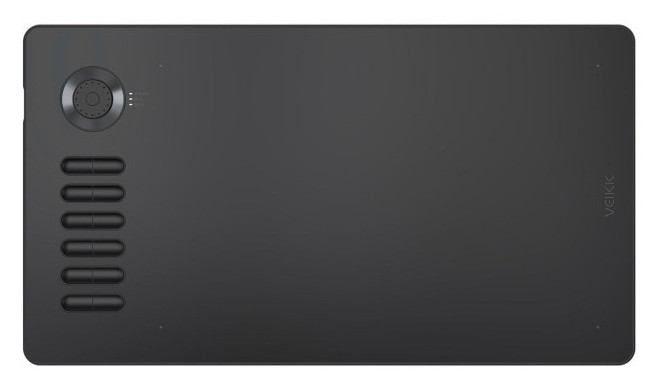 Magical "sheet of paper"
The Veikk A15 graphics tablet offers a large 25.4 × 15.2 cm active workspace with a resolution of 5080 LPI. Its matte surface is similar to an electronic version of a sheet of paper or canvas. The device carries all the movements of the special pen on the computer screen.

12 configurable function keys & scroll wheel
The A15 graphics tablet is equipped with 12 configurable buttons, to which you can freely assign the most frequently used keyboard shortcuts and functions. In addition, the wireless stylus also has 2 buttons. This is a real arsenal of handy buttons that will make your work faster and easier! In addition, the Pro models have a functional scroll wheel that allows you to select other functions from the shortcut, such as zooming in and out.

Pencil, pen, or a brush?
The intelligent P002 pen is an extremely light stylus. It does not require a battery or cable and allows complete freedom of work without recharging. The pen has 8192 pressure levels, allowing you to make the most accurate sketches. The body of the pen has two buttons that you can adjust to suit your needs. The magic stylus can also be used as a brush, marker, or eraser.

Perfect work ergonomics
Are you right or left-handed? It doesn't matter, because the Veikk A15 graphics tablet gives you complete freedom of choice. The device can be easily configured so that you can use it comfortably with your guiding hand.

Excellent compatibility
Veikk graphics tablets are compatible with Windows (7/8/10), Mac OS (10.12 or later), and Android (6.0 or later) operating systems. In addition, they are compatible with all popular graphics programs, such as Adobe Photoshop, Illustrator, Krita, Gimp, and many others.